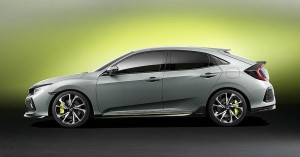 For 2017, Honda is releasing a Civic hatchback to join the already popular sedan and coupe. The Japanese automaker unveiled the hatchback concept car at the New York Auto Show. Earlier, the hatchback prototype made an appearance at the Geneva Motor Show in Switzerland. Since then, the industry buzz is rising as anticipation grows for the Civic hatchback’s release. Here are four awesome features that are catching people’s attention.

With a prominent front bumper, extensive mesh work that even shows up in the rear, and center-mounted dual exhaust pipes, the prototype for the 2017 Honda Civic hatchback is eye-catching. Sportier than other Civics, the vehicle has a spoiler that merges into the roof line and one that crosses the base of the back windshield. The lines are long, and the car’s silhouette looks extended and aerodynamic. From the outside, the hatchback is modern and even a bit edgy with brilliant yellow accents and a body that sits low over the wheels.

The designer of the Civic hatchback cites supercars as his inspiration. These ultramodern vehicles tend to have a sporty and futuristic look. It’s easy to imagine the hatchback’s design as an homage to exotic supercars. Even though the prototype is turning heads, industry insiders expect the actual hatchback to be a little less flashy.

There’s more to the Civic hatchback than its memorable exterior. Underneath the hood is a 1.5-liter, four-cylinder turbocharged engine. This powerful engine kicks out 174 horsepower, and it’s the same one that’s available on the Civic coupe and sedan. Having an impressive engine is a must for a vehicle that’s aiming to appeal to drivers who want a sportier ride. Honda seems to think the turbocharged engine is best for such a performance-obsessed vehicle.

With a continuously variable transmission (CVT) available, the changes in engine speed happen smoothly, saving on fuel. For those who prefer the mechanical thrill of changing gears yourself, the hatchback will have a manual transmission as an option.

3. Availability in the United States

The current Civic hatchback is not available for purchase in the U.S. market. However, the 2017 version will be. Many within the industry expect to see the car arriving at American dealerships in early 2017.

Honda is going to make its 2017 Civic hatchback at its manufacturing facility in Swindon, United Kingdom. As car enthusiasts know, this is the same plant that’s going to make the Civic Type R, a vehicle with a racecar-like performance that’s made for the road. Because the two vehicles will share a production facility, there’s speculation the Civic hatchback will have sporty suspension with tuning that’s typical in European cars.

Already, the latest Civics earn praise for having only a little body lean when taking corners. This superior performance stems from a more sophisticated chassis that offers the tuning and suspension that many drivers prefer, especially if they’re driving sportier vehicles.

With the coming of the 2017 Civic hatchback to the American market, Honda expects the vehicle will improve the popularity of an already beloved model.