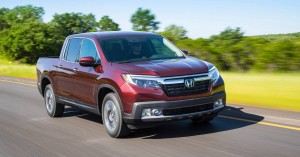 In 2014, Honda ended full-time production of its Ridgeline truck. Though it was a model that received some appreciation from the industry and drivers, its sales ultimately declined below levels that were sustainable. For 2017, Honda is offering a reboot of the Ridgeline. As more consumers discover the appeal of midsize trucks, this refreshed model has plenty to offer. Check out these four reasons to buy the 2017 Honda Ridgeline.

Unlike past iterations, the new Ridgeline looks like a traditional pickup truck, though it certainly reflects the innovative design flare you’ve come to expect from Honda. The cab no longer appears to merge into the bed. Instead, there’s what appears to be a flex gap that’s parallel to the back door. In reality, it’s just a body gap holding a rubber filling to give the impression of separation between the cab and bed. From a visual standpoint, this accent achieves the desired effect.

2. It Has a Versatile Bed

For starters, the tailgate can drop down in the same way tailgates on other trucks open. But it also opens sideways like a door. Fans of previous Ridgeline models are sure to appreciate the fact that the 2017 version keeps this well-loved feature. Another carryover from previous models is the compartment built under the bed to hold gear. It’s weatherproof, and you can drain it.

To create a more rugged bed, Honda uses sheet-molding compound plastic for the floor and sidewalls. There are eight built-in cleats capable of hanging on to 350 pounds. Conventional speakers in the truck bed are gone, replaced by six speaker exciters that make the sidewalls bounce. The bed of the new Ridgeline is four inches wider and longer.

The 2017 Honda Ridgeline has one of the most spacious cabs in its class. With 109 cubic feet, the cab accommodates up to five passengers. On the dashboard, you find high-quality materials, an intuitive layout, and a luxury appearance rarely seen in trucks. Leather seats and a leather-trimmed steering wheel stand in stark contrast to the truck’s more masculine exterior. However, all-season floor mats anticipate the possibility of the outdoors coming in. They’re easy to clean, whether they’re caked in mud or other debris. Optional heated front seats, an acoustic windshield, and tri-zone climate control enhance the in-cabin experience.

For the smaller loads you don’t want to put in the truck bed, raise the bottoms of the back seats to create space for groceries. Because of the cabin’s height, you can even fit a bicycle in this area.

All models of the Ridgeline come with a 3.5-liter V6 engine that’s able to produce 280 horsepower and 262 pound-feet of torque. With this much power, the base RT model with all-wheel drive can tow up to 5,000 pounds. The direct-injected engine provides responsive acceleration. Active Noise Cancellation (ANC) prevents this powerful engine from being a loud nuisance to those inside the cab.

In addition to all these reasons to buy a 2017 Honda Ridgeline, the truck comes with an attractive price tag. The base RT model starts at $29,475.

4 Reasons to Buy the 2017 Honda Ridgeline was last modified: July 21st, 2016 by Autopark Honda
4 Awesome Features of the 2017 Honda Civic Hatchback
The 3 Best Hondas For a Camping Trip